What’s a flag? What’s the love of country for which it stands? Maybe it begins with love of the land itself. It is the fog rolling in with the tide at Eastport, or through the Golden Gate and among the towers of San Francisco. It is the sun coming up behind the White Mountains, over the Green, throwing a shining glory on Lake Champlain and above the Adirondacks. It is the storied Mississippi rolling swift and muddy past St. Louis, rolling past Cairo, pouring down past the levees of New Orleans. It is lazy noontide in the pines of Carolina, it is a sea of wheat rippling in Western Kansas, it is the San Francisco peaks far north across the glowing nakedness of Arizona, it is the Grand Canyon and a little stream coming down out of a New England ridge, in which are trout.

It is men at work. It is the storm-tossed fishermen coming into Gloucester and Provincetown and Astoria. It is the farmer riding his great machine in the dust of harvest, the dairyman going to the barn before sunrise, the lineman mending the broken wire, the miner drilling for the blast. It is the servants of fire in the murky splendor of Pittsburgh, between the Allegheny and the Monongahela, the trucks rumbling through the night, the locomotive engineer bringing the train in on time, the pilot in the clouds, the riveter running along the beam a hundred feet in the air. It is the clerk in the office, the housewife doing the dishes and sending the children off to school. It is the teacher, doctor and parson tending and helping, body and soul, for small reward.

It is small things remembered, the little corners of the land, the houses, the people that each one loves. We love our country because there was a little tree on a hill, and grass thereon, and a sweet valley below; because the hurdy-gurdy man came along on a sunny morning in a city street; because a beach or a farm or a lane or a house that might not seem much to others were once, for each of us, made magic. It is voices that are remembered only, no longer heard. It is parents, friends, the lazy chat of street and store and office, and the ease of mind that makes life tranquil. It is Summer and Winter, rain and sun and storms. These are flesh of our flesh, bone of our bone, blood of our blood, a lasting part of what we are, each of us and all of us together.

It is stories told. It is the Pilgrims dying in their first dreadful Winter. It is the minute man standing his ground at Concord Bridge, and dying there. It is the army in rags, sick, freezing, starving at Valley Forge. It is the wagons and the men on foot going westward over Cumberland Gap, floating down the great rivers, rolling over the great plains. It is the settler hacking fiercely at the primeval forest on his new, his own lands. It is Thoreau at Walden Pond, Lincoln at Cooper Union, and Lee riding home from Appomattox. It is corruption and disgrace, answered always by men who would not let the flag lie in the dust, who have stood up in every generation to fight for the old ideals and the old rights, at risk of ruin or of life itself.

It is a great multitude of people on pilgrimage, common and ordinary people, charged with the usual human failings, yet filled with such a hope as never caught the imaginations and the hearts of any nation on earth before. The hope of liberty. The hope of justice. The hope of a land in which a man can stand straight, without fear, without rancor. The land and the people and the flag, the land a continent, the people of every race, the flag a symbol of what humanity may aspire to when the wars are over and the barriers are down: to these each generation must be dedicated and consecrated anew, to defend with life itself, if need be, but, above all, in friendliness, in hope, in courage, to live for. 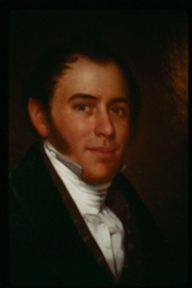 This famous name was coined by Captain Stephen Driver, a shipmaster of Salem, Massachusetts, in 1831. As he was leaving on one of his many voyages aboard the brig Charles Doggett – and this one would climax with the rescue of the mutineers of the Bounty – some friends presented him with a beautiful flag of twenty four stars. As the banner opened to the ocean breeze for the first time, he exclaimed “Old Glory!”

Captain Driver retired to Nashville in 1837, taking his treasured flag from his sea days with him. By the time the Civil War erupted, most everyone in and around Nashville recognized Captain Driver’s “Old Glory.” When Tennessee seceded from the Union, Rebels were determined to destroy his flag, but repeated searches revealed no trace of the hated banner.

Then on February 25th, 1862, Union forces captured Nashville and raised the American flag over the capital. It was a rather small ensign and immediately folks began asking Captain Driver if “Old Glory” still existed. Happy to have soldiers with him this time, Captain Driver went home and began ripping at the seams of his bedcover. As the stitches holding the quilt-top to the batting unraveled, the onlookers peered inside and saw the 24-starred original “Old Glory”!

Captain Driver gently gathered up the flag and returned with the soldiers to the capitol. Though he was sixty years old, the Captain climbed up to the tower to replace the smaller banner with his beloved flag. The Sixth Ohio Regiment cheered and saluted – and later adopted the nickname “Old Glory” as their own, telling and re-telling the story of Captain Driver’s devotion to the flag we honor still today.

Captain Driver’s grave is located in the old Nashville City Cemetery, and is one of three (3) places authorized by act of Congress where the Flag of the United States may be flown 24 hours a day.

The History of the Flag of the United States of America

1776: January 1 — The Grand Union flag is displayed on Prospect Hill. It has 13 alternate red and white stripes and the British Union Jack in the upper left-hand corner (the canton).

1776: May – Betsy Ross reports that she sewed the first American flag. [No one knows with absolute certainty who designed the first stars and stripes, or who made it. Congressman Francis Hopkinson seems most likely to have designed it, and today few historians believe that Betsy Ross, a Philadelphia seamstress, actually made the first one]

1787: Captain Robert Gray carries the flag around the world on his sailing vessel (around the tip of South America, to China, and beyond). He discovered the Columbia river and named it after his boat The Columbia. His discovery was the basis of America’s claim to the Oregon Territory.

1818: Flag with 20 stars and 13 stripes (it remains at 13 hereafter) (Tennessee, Ohio, Louisiana, Indiana, Mississippi) Act of April 4, 1818 – provided for 13 stripes and one star for each state, to be added to the flag on the 4th of July following the admission of each new state.

1892: “Pledge of Allegiance” first published in a magazine called “The Youth’s Companion.” Authorship was claimed for James B. Upham and Francis Bellamy. In 1939 the United States Flag Association ruled that Bellamy was the author of the original pledge. The words, “under God” were added on June 14, 1954. In pledging allegiance to the flag, stand with the right hand over the heart or at attention. Men remove their headdress. Persons in uniform give the military salute. All pledge together: I pledge allegiance to the flag of the United States of America and to the Republic for which it stands, one Nation under God, indivisible, with liberty and justice for all.

1909: Robert Peary places the flag his wife sewed atop the North Pole. He left pieces of another flag along the way.

1912: Flag with 48 stars (New Mexico, Arizona) Executive Order of President Taft dated June 24, 1912 – established proportions of the flag and provided for arrangement of the stars in six horizontal rows of eight each, a single point of each star to be upward.

1931: Congress officially recognizes `The Star-Spangled Banner’ as the national anthem of the United States. Its stirring words were written by Francis Scott Key.

1945: The flag that flew over Pearl Harbor on December 7, 1941, is flown over the White House on August 14, when the Japanese accepted surrender terms.

1963: Flag placed on top of Mount Everest by Barry Bishop.